Right from the start I had found that the carpet in the footwells used to get very messy and required regular vacuuming.

I had experimented with an extra removable carpet and a rubber floor mat but found they both kept rucking up and making driving difficult.

I had long admired a friend's car that used aluminium treadplates on his car so decided to go down that route.   So after building cardboard templates and a few minutes with an angle grinder I have new floor coverings. 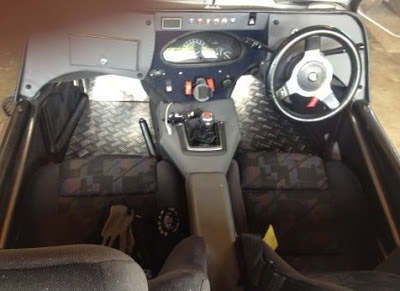 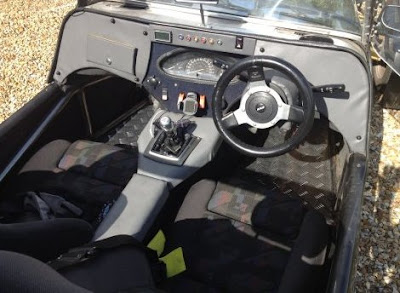 They look rather good and make getting in easier as I can slide my feet under the dash.
Posted by Alan at 21:35 No comments:

Having a permanent Tab in my browser looking for Robin Hood spare parts, I just picked up a couple of bargains. 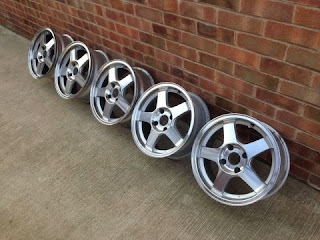 First was a set of 5 alloy wheels with 16 matching wheel nuts and 4 Robin Hood centre covers. 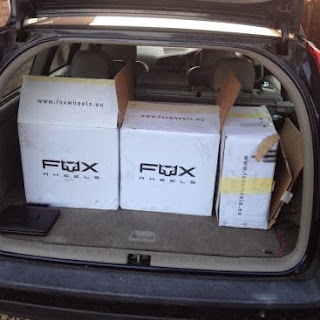 I had to drive 1:30hr to pick them up but was very surprised to find that not only were they brand new but they were in the original packaging.   A great bargain at £150. 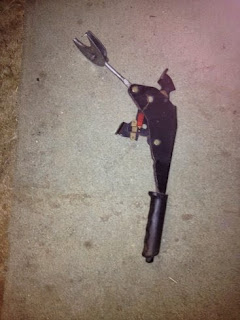 Next was a replacement handbrake from a Ford Sierra.  I had originally intended just to use it as a spare, but it is in pristine condition, is tighter than the one I have fitted at the moment and comes with a built-in warning light switch.   Looks like I will have to swap them over.

Having done the front and back ends I thought it was time to do some work on the interior, mainly the seats.   There were various things I fancied doing.

Obviously the first thing I needed to do was to remove the seats.  The driver seat turned out to be easier than I expected, just held in by 4 bolts bolted through the floor.    It was a bit of a tight fit and I had to remove the tunnel top, but I eventually got it out.   The passenger seat was more difficult as one of the 'captive' bolts 'wasn't'.   But with a bit of fiddling I managed to get the nut off the bolt. 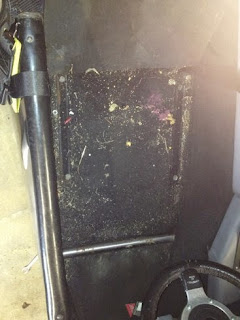 Once the seats were out this was what the floor looked like.   So a good brush out and vacuum was called for. 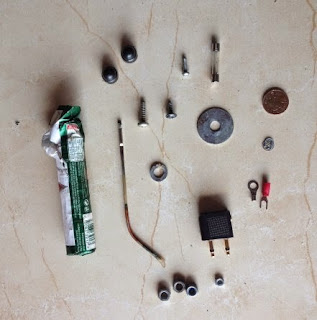 And this was what I found during the cleaning.

Once I had the seats out I was pleased to find there were actually 4 sets of adjusters on the drivers seat (forward/backward, height, rake & lumbar support) instead of just the two I had used (forward/backward & rake).  The other 2 had been hidden by the side panel of the car.  So I preset them before putting the seats back in.  The passenger seat had 3 adjusters, as the height was fixed. 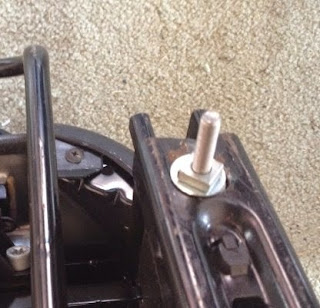 Next thing was to fix the 'non-captive' bolt.  I haven't taught myself welding yet so I resorted to a new bolt with a narrow nut tightened right up to lock the bolt in position.

Then a good wash and scrub of the seat fabric.

Both seats were simply mounted through the floor but with large iron washers and metal strips to spread the load and prevent them pulling through the stainless steel floor. 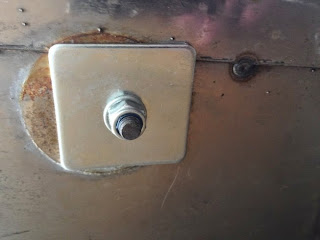 Although they were perfectly safe I took the opportunity to add some extra spreaders (from B&Q) to make then even stronger.   And just to be ultra-sure I replaced all the nuts with new Nyloc ones.

Having initially failed to work out how the handbrake adjustors worked I did some research on the Internet and on the RHOCar forum and figured it out.  So up came the back wheels again.

The basic problem was the brake did not begin to bite until the 4th-5th click of the ratchet and wasn't fully on until the 7th-8th click.

So I wound it up (The plastic unit just sits in the chassis member and when you rotate it it moves along the outer cable, taking up the slack) until the bite started at the 2nd-3rd click and it was full on by 4-5th click.  Much better now. 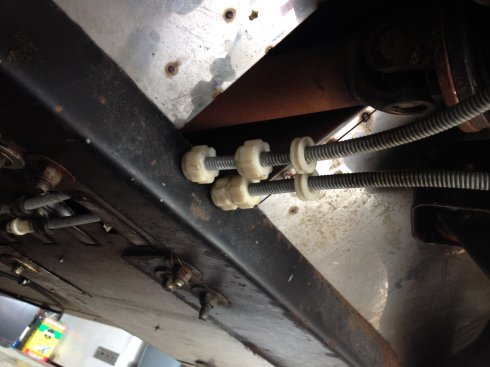 Here is a picture of the unit just before I tighten up the second (nearest) locknut.

Still don't know the purpose of the extra washers ?
Posted by Alan at 13:32 No comments:

Having spent time sorting out the front end I decided to have a look at the rear end.  There were 3 things on the ToDo List:

1.  Raise the rear height.  I had tried before and failed to manage it.
2.  Adjust the handbrake.  Although it had passed the MOT I felt it needed tightening up a bit.
3.  Mount the offside fog light direct to the body to match the nearside light.

Didn't have much success.   I couldn't actually release 2 of the wheel nuts on the nearside rear wheel, in fact I snapped my wheel brace trying.   Looks as though the garage tightened them with an air gun a bit too aggressively.   I still tried to raise the springs, but as before, when I tried to turn the lock nut the whole shock absorber rotated.   Have to leave that to the experts with the right tools.

And didn't manage to do the handbrake either.  I couldn't actually see where the adjuster was so will have to do some research.

But I did manage the fog light, although it was rusted solid and I had to drill out the original bolt. So now the 2 sides match.

Storing the doors behind the seats was a good idea, but because the gap was very narrow I found that the back panel was getting rather scuffed. 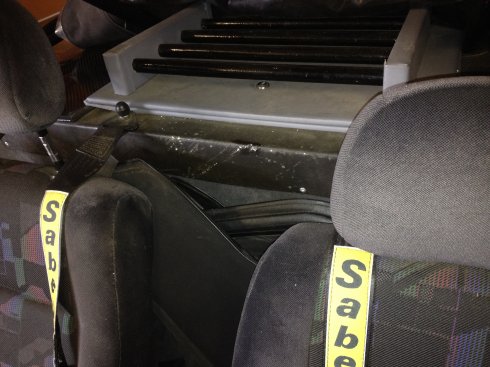 and as it showed through white on black it was very obvious and let the car down.


So the first thing to do was to try and move the seats.  I had tried before and failed, as they had been in a fixed position for 5 years, but after a lot of 'gentle' persuasion I managed to bring the backs up a bit and give some extra clearance for storing the doors. 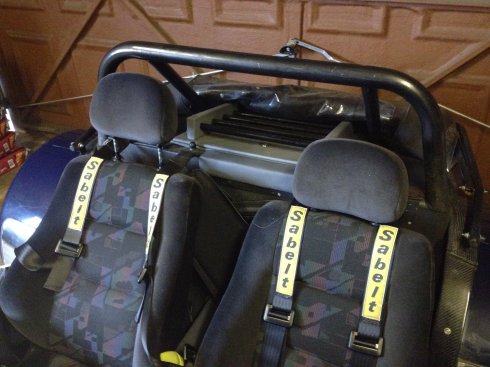 Having fixed the reason for the damage, I then just built a vinyl-covered addon from hardboard and glued it on.

Having been running with mismatched front wings since the crash, when I had to replace the offside wing, I decided it was time to put the new matching wing on the nearside.   And it gave me the opportunity to fix a number of small issues I had with the front end.

1.  One of the wing mountings was loose and only stayed tight with the wing actually mounted and taking the strain.

2.  The wings were mounted using ordinary bolts and nuts and I had already lost a couple through vibration.  The bolts needed to be replaced with Nyloc nuts.

3.  I needed to label the indicator wires so it wasn't trial and error whenever I removed and replaced the nose cone.

4.  The wing mountings were beginning to rust so needed painting.

5.   The wishbones also needed touching up.

6.  The nose cone was only held by one bolt at the bottom as it was almost impossible to insert the second bolt due to the proximity of the radiator. 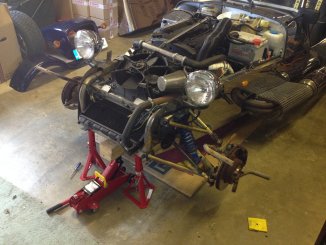 So the first thing to do was remove the nose cone and the wings.

This gave me access to the radiator and hoses, and it seemed to me as though the lower radiator hose did not have any water in whereas it should be full.   So I actually disconnected the hose at the top of the radiator and filled the cooling system from there (rather than through the expansion bottle) while squeezing the hose to try and expel any air.   She took about 3 litres of more water, so it will be interesting to see the effect. 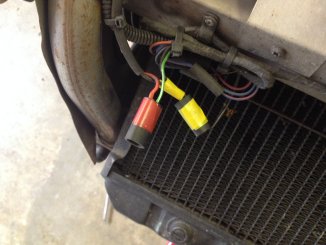 Next was to label the connections for the indicators.

Now I know which wire goes where.

Now to the painting.   First a good clean and wire brush on the stays, then a coat of primer, followed by a top coat. 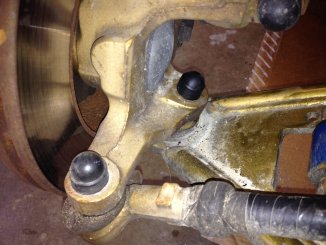 And the same for the wishbones.   And while there I noticed that I had missed the bottom wishbone joint when I had put plastic nut covers on everything, so added them.

Next job to tackle was the bottom mounting of the nose cone.  You can see from this left/right photo that the left one is clear and easily accessible, but the right one is partially blocked by the bottom hose mounting on the radiator, making it difficult to put a nut and bolt in when mounting the nose cone. 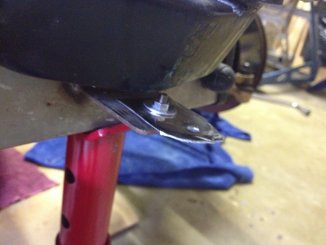 The simple fix was to fit a couple of stainless steel 'extenders' to make the holes more accessible.

Now the primary task of replacing the nearside wing.  As previously covered, the new ones were about 2" shorter than the original ones so a separate mounting plate had to be used, and an extra long mud flap.   So I made an exact copy of the offside wing, mudflap and mounting bracket.   Then put both wings on the car using nyloc nuts throughout.   Finally put the wheels back on.

So following a final check of all the nuts, particularly the wheel nuts, the nose cone was replaced and we are good to go. 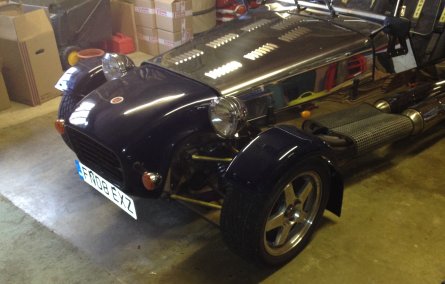 She looks lovely and clean and smart, with at long last a matching pair of front cycle wings.

Three weekends in a row

Making up for the 2 months away, I took the car to the "Horsepower at the Hall" meet up at Doddington Hall near Lincoln this weekend after the Stilton Cheese Run and Stoneleigh the last 2 weekends.  I invited all the Lincolnshire members but in the event, only one other turned up, mainly because the weather was very poor.  I was lucky and the rain held off all the way there (about a 1hr run) 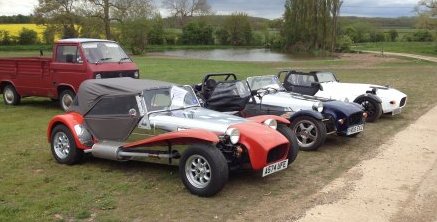 So we parked up together and were joined by a new Westfield owner, who I tried to get to join the club.  As it turned out I had to put the top up for 30 mins or so when a shower came through.

The weather also cut down on the attendees so there were only about 100 cars, compared with the normal 200, but still some nice ones to look at. 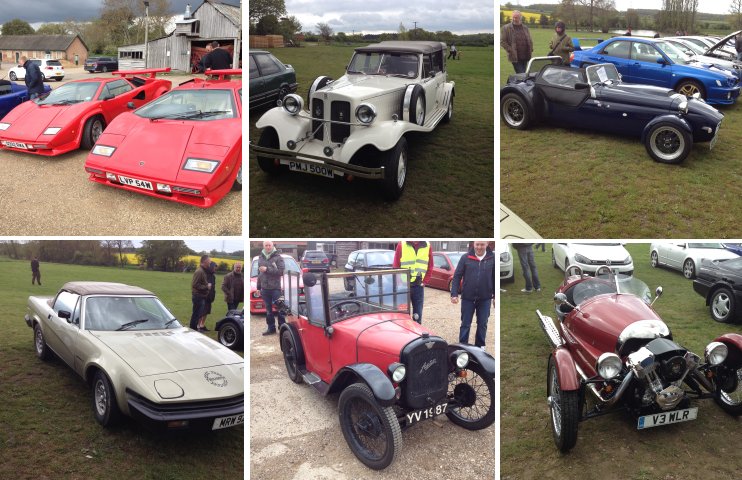 A nice run back home, with just some spots of rain showing on the windscreen but nothing felt inside the car.

For the second year running I camped over at Stoneleigh.  Now that Donnington has been cancelled the only 'official' kit car shows are Stoneleigh and the RHOCar 'End of Season' bash, so I needed to attend.

I had a wedding reception on the Saturday night so prepositioned the car at my daughters house near Kettering.  Unfortunately, it poured with rain all night and when I came to start her in the morning she was completely dead.  Once I took the bonnet off the reason was obvious, as the engine electrics were dripping wet.  So it was out with m daughter's hair dryer and 5 minutes later she was running perfectly.   So I have cut a piece of plastic sheet to cover the engine compartment if I ever have to leave her outside again.  Lesson learned.

Nothing really new at the show so after a quick run around the stalls I parked up at the Club stand and spent the rest of the time chatting with old frinds and catching up. 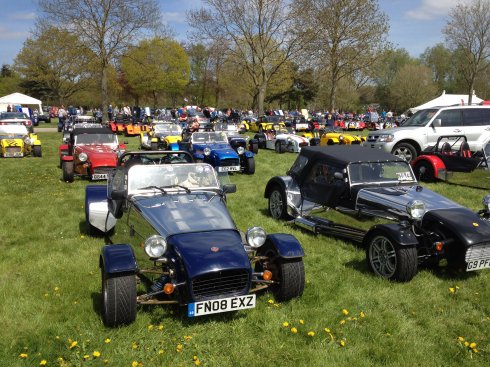 Then off to the campsite for a few beers, a hog roast and chatting long into the night.  Here is an overhead shot from a drone while we were queuing for the hog roast.  My car and (small) tent are circled.. 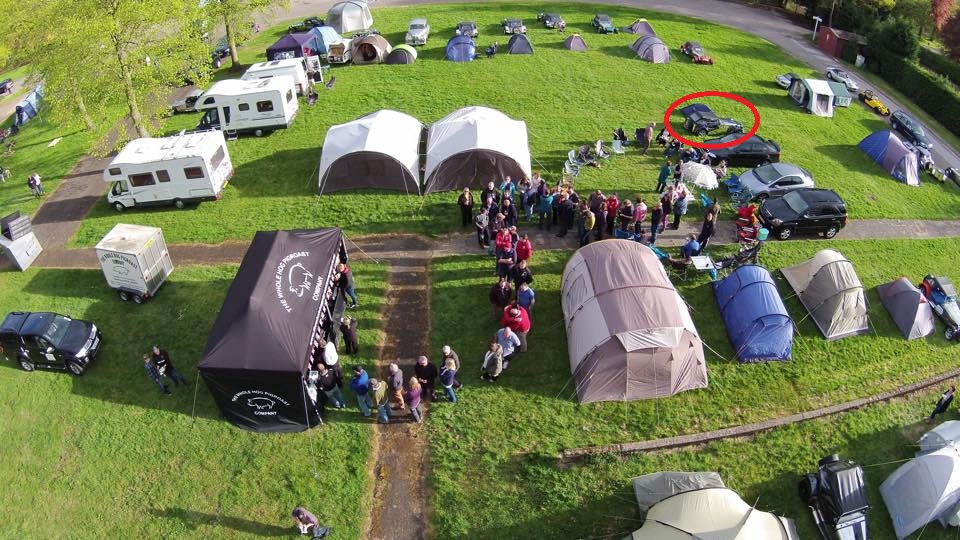 Summer definately getting close so looking forward to more runouts.