I've noticed recently that the battery is losing charge very gradually.  I doubt it is the battery itself a it is relatively new, so I guess one of my 'modifications' is causing a leak.   As it happens I have been thinking of buying a 'smart' battery charger (One of those you can leave permanently connected and it will not overcharge the battery) for some time, particularly as I am about to leave her for 3 weeks.   And we know now that disconnecting the battery is not a good idea as you lose the idle settings in the ECU.

But I also wanted one where I wouldn't have to keep taking the bonnet off to clip the leads on.  So I bought one that had a detachable lead and plug/socket.  It then has 3 optional types of lead to connect to the battery, a normal one with crocodile clips, one with a cigarette lighter plug and one with just 2 bare wires.  The first and third came with the pack, the cigarette one was extra.   So I used the ones with 2 bare leads. 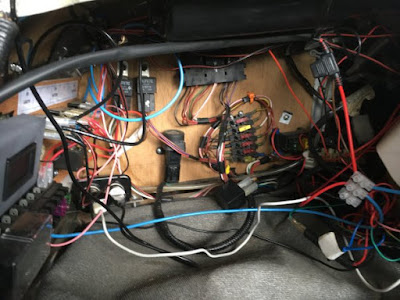 So I wired the lead into the passenger footwell (The 6-way plastic connector on bottom right is connected directly to the battery, and you can see the red lead going vertically up to an in-line fuse).   This area is becoming even more of a 'rats-nest', I really ought to tidy it up.  On the positive side I know what every wire does 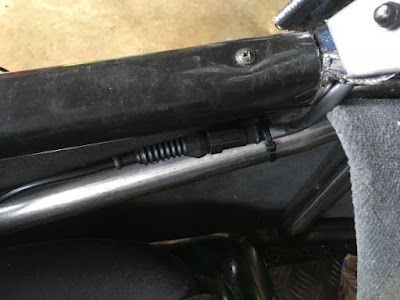 And the other end of the lead comes out just by the passengers arm rest.   This shows it with the charger plugged in.  In day-to-day driving it is nicely hidden away.   So now it is a 20 second job just to plug/unplug the car.

What's the odds on me driving out with it connected one day
Posted by Alan at 19:01 No comments:

Time to look into my odd lambda sensor behaviour.  As far as I can see there are only 3 reasons for this:    ECU not programmed correctly (not much I can do about that),  lambda sensor heater relay (which should power the heater on engine start) not operating correctly or a dodgy lambda sensor. 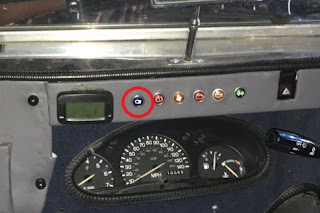 First thing to do was to give some visual indication of the heater status.   I decided to 'borrow' the headlight full beam warning light, which although fitted, hasn't been wired in yet.

Next I tried too reproduce the problem, this time by driving to the Post Office, sending off some build-DVDs to a new Superspec owner, then driving back.  and to add another factor I stopped for another couple of minutes in a layby. 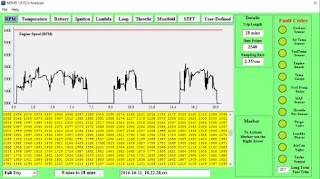 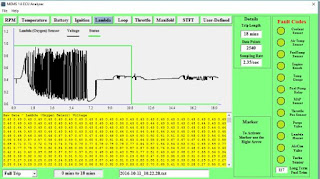 And here was the lambda trace. So I guess the good news is that the problem was not a one-off but is reproducible, so that will make testing easier.


We can see that while sitting at the Post Office the lambda sensor went to it's default 0.45V although the ECU still showed it's status as being on-line  (it's a bit odd but we can only assume that was a decision by the Rover programmers).    But when I started the engine at the 9 minute point, it didn't react enough to the exhaust gases and at the 10 min point the ECU have up and switched it out of the circuit.   Even on the next engine start at the 15 min point it still isn't really reacting properly.

I need to do another test run tomorrow, but this time switching the ignition off between sessions (I had to leave it on to keep the data flow going), to see if rebooting the ECU helps.

However, the really important thing is that for all 3 of the engine starts, the warning light illuminated so we can rule out the relay as the problem.   So I guess the next thing to do is try a replacement sensor. 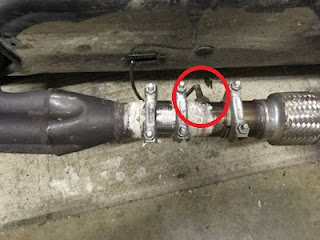 I have a couple of spare ones but unfortunately, last time I rebuilt the manifold/pipe join I stupidly positioned the sensor so there isn't enough clearance with the body to get it out without taking the exhaust pipe off.

So I'll leave that test until the next (inevitable) time when I have to remake the joint again.