Although I am supposed to be convalescing I was going stir crazy so decided to use the car for the next visit to the surgery.

Before that I had to replace the broken front number plate.  So decided I might as well get a European one while I was at it.  And that entailed replacing the rear one as well. 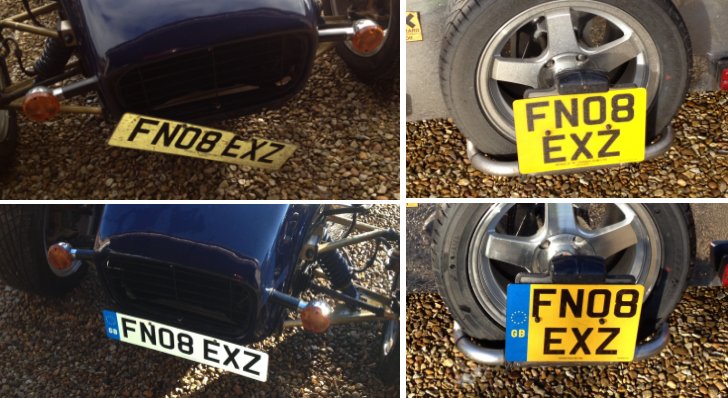 (And they are straight and level, it is my photography that is tilted :-) )

So went for the drive.   Tactical error :-)  The country roads between our house and the surgery were filthy from farm traffic and recent rain.   The very pleasant and fun 20 minute drive has resulted in over an hour's work to clean the car.   Stainless steel is all very nice but it does get dirty easily.   But Windolene works wonders. 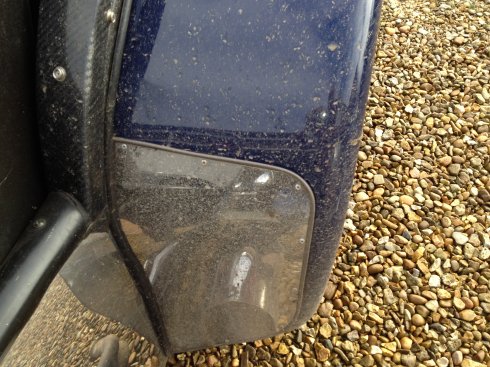 I was warned that the engine had a tendency to overheat in traffic, and also that the water needed filling up regularly.  The previous owner had fitted an override switch to the fan to get around the problem.  He has also removed the thermostat in case that was not opening fully.   As a result the car was very slow to come to working temperature, worked nicely while still moving but heated up if you were stationary.  I thought this was a bit odd, as there was a thermostatically controlled switch in the radiator that should have turned the fan on long before the override switch was turned on.


As this system was perfectly usable I left it alone initially, filling it up every couple of weeks.  It is rather an odd design in that you fill it up via the expansion bottle.  However, on 3 occasions I noticed water coming from underneath after I returned from a trip and decided it must have a leak somewhere.  But further investigation showed the water was coming from the overflow pipe from the expansion bottle.   To make sure I installed an ‘expansion’ bottle to the ‘expansion’ bottle and ran it with the overflow tube into the new bottle.  Not one of my better plans as after about 15 minutes I saw water cascading into the passenger footwell.  Turned out the new expansion bottle had quickly filled and overflowed as well.

It was after I had refilled it from this incident that I found part of the problem.  I had done up the pressure cap on the expansion bottle to what felt like full tight, but on this occasion I decided to make sure and by applying more pressure I managed another quarter turn.  Since then no water leak.

A test of the original thermostat showed it was probably seized, so a new one was purchased off E-Bay.

I then found that shorting out the thermostatic switch made the fan run, so decided the switch was broken.  The general advice on the forum was not to try and replace it, as apparently it was a poor design (not screwed in, but a bayonet fitting) and incredibly difficult to seal a new one.  So I decided to buy an after-market adjustable thermostat switch and fit that.

Status:     Thermostat and switch awaiting fitment.
Posted by Alan at 21:30 No comments: