With the shrinkage of the kit cars shows, we really only have Stoneleigh left, the first show of the summer season.   So I really ought to go, particularly as the Club holds it's AGM and then lays on a hog roast.  I wasn't sure about camping overnight but eventually decided to do it.

First nice surprise was that the Show had recovered from a poor showing last year to quite a respectable number of kit cars and trade stands.  Maybe the weather last year put people off. 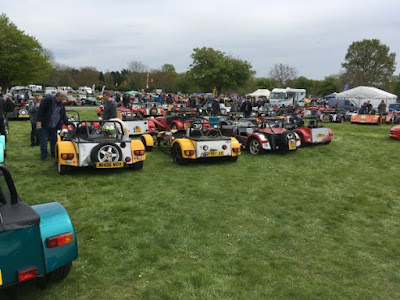 So had a good day looking around and then a nice evening sitting around chatting, with beers and pork baps.   Went to bed at 10:00 and a few minutes after I settled in it started to rain.   It carried on till 05:00. 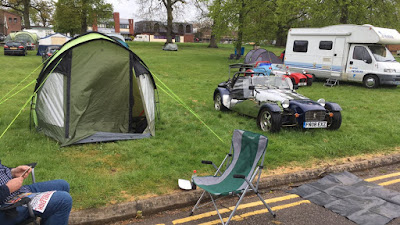 But at 08:00 when I got up it was nice and clear.  So back on the Club stand with the car.   This time only the real die-hards were there but it was still nice to wander around chatting.

Lovely day out driving the Stilton Cheese Run, for the 4th year in a row.   On my first run we had 4 cars, this year we had 16 Robin Hoods and 4 other cars, all in formation.  And 3 other Robin Hoods who decided to drive the route as individuals.

Everyone arrived at Uppingham before 10:00 and parked up.   Apart from us there were 300 official entries and I reckon another 100 unofficial entries.    A quick look around and saw these: 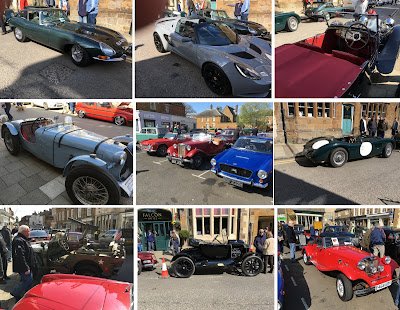 Looked at all the other hoods and saw my next project.  Isn't that the most fantastic colour scheme ?

First problem was to find somewhere we could group up before starting.  We picked a cul-de-sac near the start.   It looked like this :

I was slightly worried the residents might be annoyed, but actually they were very happy and came out and chatted away with us.  One lady filled a couple of water bottles and as we left shouted she would do tea and cakes next year.


Then at 11:00, off on the run, the first half took 1:10 hrs and we finished up at New Lodge Farm.  Janet had brought Neve to see us, which was nice, so the other drivers, some of who had seen her last year, met her again 1 year later.   Time for a quick cup of coffee and a snack.


Then off for the second half of the run, which took about 40 mins, with a now usual stop for a photo op of a very impressive viaduct we go under.  I was about Number 6 in the queue so a hidden here. 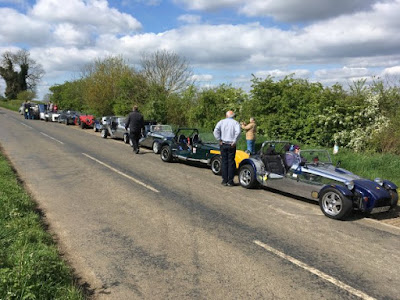 After lunch at Stilton we all drove back home.  For me it was 30 miles up the A1.

The Tiger wasn't perfect unfortunately.   The cooling system was fantastic and worked exactly as it should (first time in 4 years), but the lambda sensor started playing up, so although she was perfectly drivable, I was a bit down on power and a bit sluggish.    As it happens that did not matter with 20 cars in formation on country roads.  I don't think I actually ever got into 5th gear.   It eventually started to work on the last leg up the A1 when I cruised happily at 70mph.

And the weather was perfect, of course.  I started the day wearing a shirt, jumper, fleece, neck scarf, gloves and woolly hat.    By the time I got home I was just wearing shirt and jumper.    So 100 miles covered all together.      Now looking forward to Stoneleigh Kit Car Show next weekend.

Mustn't forget annual maintenance, particularly as she is getting on a bit.   Decided it would do no harm to give her a new set. 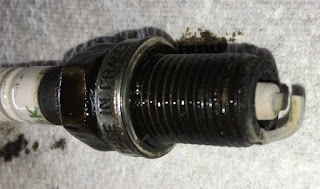 Very pleased to see the heads were a perfect chocolate colour showing the mixture is perfect.

Slightly concerned at the oil on the threads, looks like there might be a small oil leak from the valve cover gaskets,
Posted by Alan at 11:51 No comments: