Recently I was looking at some pictures of another Superspec in Italy and realised that we were missing something that most other cars have, the make and model number in chrome on the back. 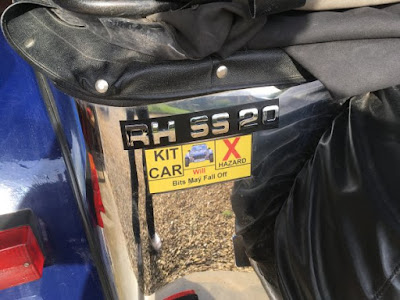 Having already had a passenger with a burnt leg I decided to add yet another warning message. 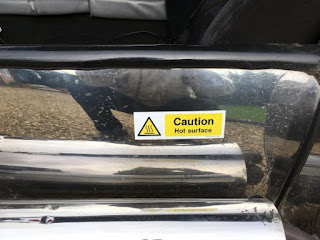 Hopefully it will help.
Posted by Alan at 20:44 No comments:

When I took her out a couple of weeks ago it was obvious the lambda sensor was not happy.  This was the data readout:

What should happen is that the ECU sets the status to ON when the engine starts, then monitors the output from the sensor.  If it doesn't see a proper signal after about 80 seconds it switches the status to OFF.  So there were 2 things wrong:  The status started at OFF;  the sensor never really started working.

However, I had just redone the exhaust join upstream of the sensor and, although the sealant was supposedly sensor-safe, I wasn't convinced it hadn't coated the sensor, so I was hoping that a good run would burn off the containment and then on a second run it would all start working again.

So out for a good run and this was the result:

So it was nice to see that the status started at ON.   And also I had been a pessimistic as it seems the contaminant burnt off very quickly and the sensor started to work.  What was a surprise was that the ECU left the status at ON for over 2 mins with a non-working sensor.  Never seen that before.

Still, nice that everything is working.