Fascinating day today.   My friend with the same car had bought 4 Post Office weighing machines from another member of the Club.

As it was such a nice day I drove down today so we could 'corner weight' both of the cars.   This technique is really only applicable to racing cars and is designed to make sure the car is properly in balance so it handles correctly, but as we had the machines, and can easily sell them on to anyone else in the Club we thought 'why not give it a try'.

You have to put the car on the scales, making sure they are absolutely level with each other, so as the drive was slightly on a hill we had to put pads under the rear ones so the car was horizontal.   Then the driver sits in to 'mimic' normal usage and we both happened to have about 1/2 tank of petrol.
We did his car first and his figures were about

There are then some calculations where you get percentage figures for the diagonal as well as the more obvious ones across the car. Although his scores were still in the high 40%s, obviously there was something amiss with his front left.   Also, interestingly he says that under heavy braking that wheel always locks up, which makes sense if it not carrying as much weight as the others.  Also, when looked at from the rear the car is definitely right side higher.

We tried adjusting the suspension to get it more equal but didn't have much success as it suspension adjuster was rusted.   So sprayed with WD40 and he will try later. 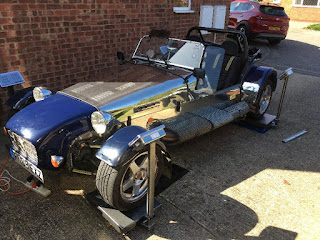 So then we put the Tiger on the scales.   Bear in mind I have played with the suspension units a lot over the years, trying to get the ride height up and the car slightly nose down.   Here she is:


And here are the figures

Which gave an overall score of 49.7% against a perfect score of 50%.    AMAZING !!   A tribute to whoever put the rolling chassis together (and to me of course for ensuring all changes I made were symmetrical.)   ]


It was also nice to confirm the overall weight of the car.  With me in it totalled 950 Kg, without me the kerb weight was 850 Kg.    This confirmed our suspicion that the Superspec is heavier that the average 2B, as they come in at 750Kg.   I think a lot of that is our engine, which is much heavier than the other engines.   But when you think the Rover 400 used to weigh in at 1270 Kg we still have a good saving,

So a most enjoyable day, as well as 2 nice 1:20 Hr drives in glorious weather.