Lovely day on the Stilton Cheese Run.   Weather was perfect, I did the whole (100+ Miles) in my shirtsleeves.

Basically we all park close to the Main Square in Uppingham at around 09:45 and spend an hour or so admiring the cars (300+).  Then we group up at an RV about 1/2 mile away.  It's a housing estate but luckily the inmates don't seem to mind.   In fact one of them came out and said that if she had known we were coming she would have put the kettle on :-)   We then follow the old Stilton Cheese delivery route with a sideways diversion to see Rockingham Castle.

Here we are at a viewing point about 1/3rd of the way round:

I'm hidden behind the second, green, car.   We had a turnout of 18 from the Club, although a couple were in ordinary cars.   The 'leader' had a good excuse as he has just had a new knee and can't drive.:-)

At the half way point we all go into New Lodge Farm, which has a Farm Shop, cafe and a huge field.  So more chatting and admiring the cars and a well earned cup of coffee.    After about an hour it's off again for a drive thorough the back roads to Stilton itself on the A1, getting there about 14:00.    At the end some stop for lunch.  I tried it 2 years ago but they insisted on having a full 3-course lunch and it took well over an hour to start service.  So for the last 2 years I have just driven back home.
As you can imagine, being in convoy was very testing on the Tiger, with constant gear changes and stop/start motoring.  She coped well, although I seem to have developed a new rattle on the front left, and I am convinced my clutch is getting noisier.   Cooling was perfect.   I can see now that I have a sweet spot between 30 mph and 60 mph.   Drive between those speeds and there is status quo, heat generated by engine equals cooling generated by system.   But if I drive below 30 mph there is not enough air getting in, and if I drive above 60mph then the heat generated overcomes the system.   In each case the fan comes on and restores the status quo.  So did the whole 100 miles sitting between 87C and 91C,
Whilst it was a nice day, I didn't really enjoy travelling in convoy, as I said it means you are never at your natural speed.   I will definitely do it again, but I think next year I will go solo and go at my own pace. 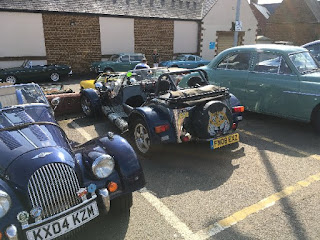 Here's me parked at the start.  I forgot to leave her in gear or put the handbrake on so after I left she must have gently rolled forward and rested on the wall :-)   Senior moment.