More on the Cooling System

Interesting experiment today.    Having fixed all of the cooling system so that she runs at just over 90C, with the fan kicking in at about 95C and stopping at 90C she is now a pleasure to drive and I don't have to keep checking the temperature gauge.   But the only 'niggle' was that she was taking quite a long time to warm up to temperature. 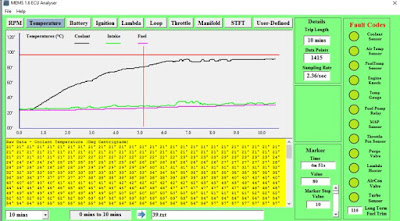 
The general consensus was that this was caused by a rather odd design of the cooling system by  the designer.    He had taken a pipe that went to the heater in the original Rover design and taken it across the top of the engine. via a stainless steel pipe,  to the top of the radiator.   None of us could figure out why he did that except that it helped prevent air locks when you were filling the system via the expansion bottle.    The problem is that meant there was always a circulation through the radiator even when the thermostat was closed. 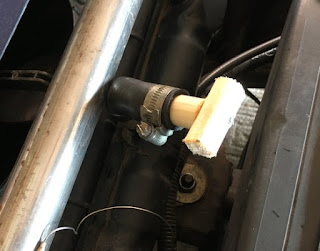 So now i am in the position where I don't need to refill the system (Last time I added any water was back in 2015) I decided to try removing the pipe and see what happened.    In good kit car fashion I just blocked the hose with a 'widget' made from 18mm dowel. 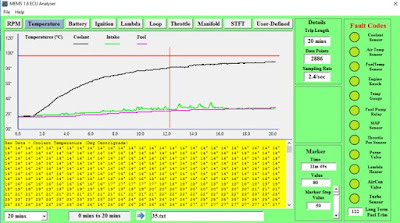 And even I was surprised by the result.   Here is a screen shot from today's trip:

This time it was less than 5 minutes to reach 80C.  More than twice as fast as before.  A dramatic improvement, so from now the pipe stays off the car.
I shall probably carry the pipe and a screwdriver around for the next few trips just in case there are any unintended consequences, and I need to find a better solution than the dowels to block the pipes as they are not 100% watertight.   I guess a rubber plug would be better.   We'll see if the Club have any suggestions. 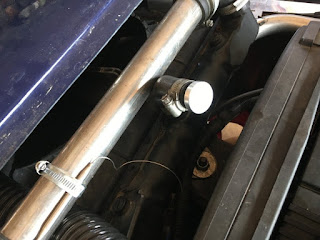