When he was building her the original builder had the sense to bring the air filter forward into the nose cone instead of attaching it direct to the throttle body.   That meant she was getting nice clean air instead of the hot, dirty air from the back of the engine  (This engine was originally designed to be transverse, across the car, so in that case the air filter was already in front, in clean air).

This worked well, but all he had available at the time was an 80cm diameter tube and the throttle body diameter was 70cm.  So it has been 'scrunched' up to fit.   I had always intended to replace it and some 70cm tube arrived while I was away.  So fitted that this morning.

I had also recently realised the air filter was the original one from 2008, whereas they are normally replaced every couple of years, so decided to treat her to a new one at the same time.   Bought a universal one to fit any tube between 65 - 80mm and fitted that 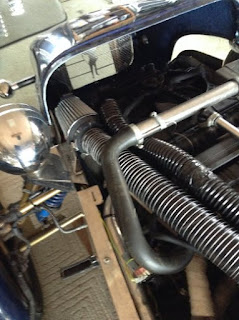 So now she looks like this (nose cone hinged up):

Took her out for a quick run to make sure she was breathing OK.  Didn't expect to see much difference.  Boy was I wrong.  Absolutely amazing transformation.   She's always been fast, but I found it next to impossible to keep to the speed limit.   Just a slight pressure on the pedal and she leapt forward like a scalded cat and I was passing 70.
Engine unbelievably crisp and growling beautifully, revving so much more freely than before.

Who would have guessed a new air filter would have made that much difference ?    Am now thinking that I should split the pipe in two and use half of the 80mm pipe at the front as the filter will still fit.   That would act as a ram air system and force more air into the engine.   A very cheap supercharger
Posted by Alan at 14:51